During July 2020, I tried a bona fide ketogenic diet for about 10 days, followed by a blood test. [see my followup in October 2020]

A full blood panel at the end of 10 days showed a huge plunge in my triglycerides: my lowest ever, less than half the levels of a year ago, and lower even than during the years when I used to take cholesterol-lowering simvastatin.

Giving up carbohydrates is harder than you’d think — even something as simple as a banana can throw you off — but it’s not that hard once you get the hang of it. I slipped into ketosis relatively quickly — ketones start to show up in less than two days.

The side effects of fatigue and then bad breath started a day or two later; next time I’ll drink more liquids and perhaps take salt or B12 supplements. 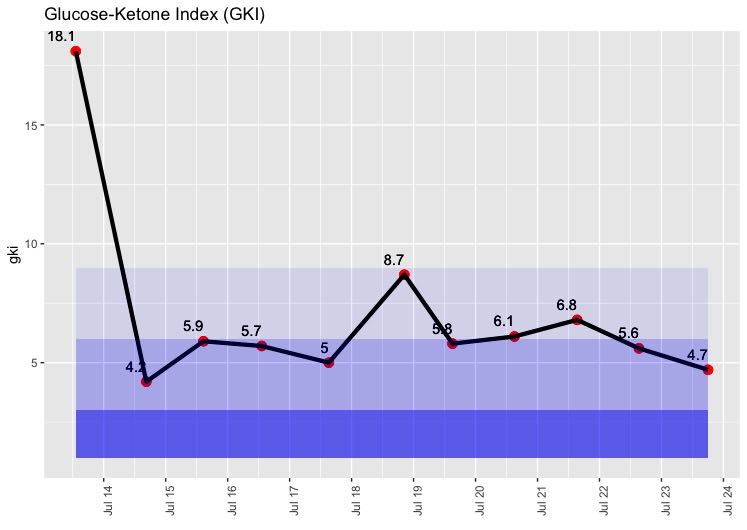 A ketogenic diet assumes you eat per kilogram of body weight:

For me (75 kilos) this translates to

Which seems like a lot of fat calories, but if I can’t increase carbs, then to maintain a sufficient number of calories for the day, you’ll need to increase either fat or protein and fat is much easier.

I hear conflicting advice about the carb portion. Should I shoot for an absolute number of carbs (many people say under 40 or even 20g per day), or should I look at a percentage of my daily calories? For example, if I eat 2200 calories / day, then I should shoot for

which is considerably higher than a fixed amount that people have suggested per day.

After a few weeks of ketosis, most people see a drop in their blood ketone body levels (BHB).

Keto adaptation is a different, deeper phase of ketosis that happens after about a month when the body learns to run effectively on fats. Supposedly it takes about 2-4 weeks to adapt, during which you may feel some “keto flu” and “metallic breath” but after about a month you’ll notice better endurance, energy, and clearer thinking.

Upon adaptation, some people notice low glucose levels (under 75, perhaps as low as 50) yet with no fatigue or hunger.

How many calories I need depends on my BMR, which you can calculate here:

My BMR is between 1300 and 1600, and my calorie needs are between 2200 - 2700 depending on how much exercise I do. Although I don’t have a job that requires me to be physically active, I do tend to walk around a lot and generally spend at least 20 minutes per day at double my resting heart rate.

One solution to the fatigue is electrolyte supplements, including salt. Bone broth is good too.

Restricting carbohydrates acts as a body stressor by stimulating the release of cortisol. Because that much cortisol released can result in “cortisol fatigue”, your body becomes more susceptible to infections like the common cold.

Or maybe take some Vitamin B5: https://www.drberg.com/blog/what-to-do-when-you-get-fatigued-on-the-ketosis-diet