My Freestyle Libre continuous glucose monitoring sensors often seem terribly off: the sensor routinely shows a dangerous plunge to 60 or even lower when I’m sleeping. Can I trust the results?

I decided to compare my CGM with an off-the-shelf finger prick glucose testing device – usually considered the at-home gold standard. I did a similar test several months ago, and found that two separate finger prick glucose testers from two different manufacturers agreed with each other when taken at the same time, and that the CGM agreed after a ten-minute lag. 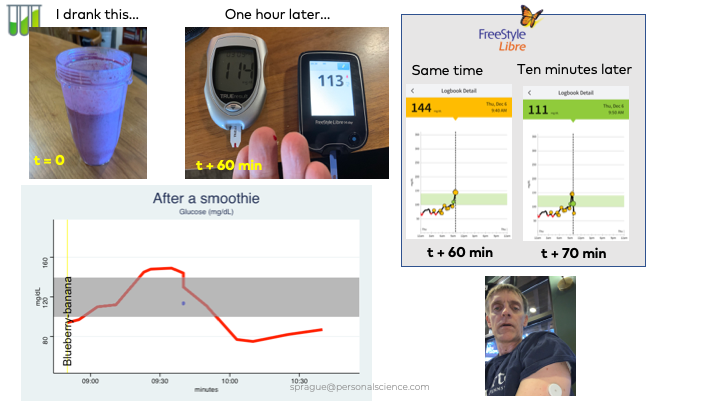 But that test only measured a single point in time. What if I prick myself regularly throughout the experiment? Would the overall rise and fall of my glucose match on the different sensors?

Since I already have several days worth of data showing how my CGM performs after eating whole wheat bread, I tried that experiment again, only this time I measured using both the Freestyle Libre and the Contour Next EZ. 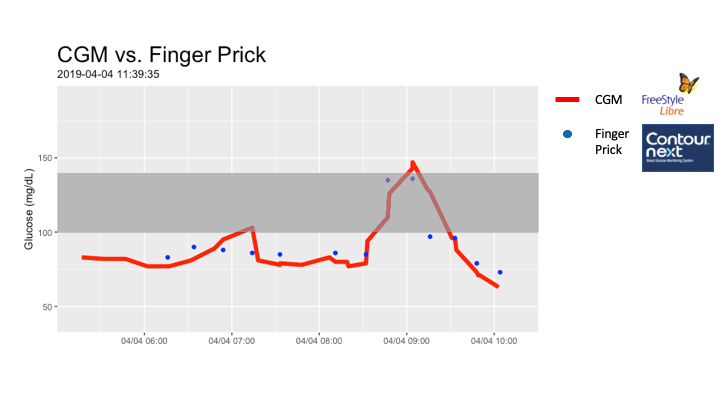 The blue dots show values returned from the blood glucose finger prick, while the red line indicates the continuous readings from the CGM. Although the values don’t quite match up, and the Freestyle consistently appears lower than the finger prick value, it’s hard to dismiss the CGM values as a roughly accurate look at my glucose levels. In fact, if you really just care about trends, the CGM’s higher resolution may make it a better measurement.

Meanwhile, note the first several blue dots in this chart, representing finger prick tests taken at 15 minute intervals after drinking my morning cafe latte. The roughly 150ml (5 oz) of whole milk in that drink shows a mild jump on the CGM plot, as expected, but the finger prick fails to capture it at all. Because I was testing at 15-minute intervals (who wants to poke their finger more than that!), I can only assume that the finger prick happened to miss the burst of glucose from the milk – a failure that must be counted against its otherwise assumed overall higher accuracy compared to a CGM.

Conclusion: for general testing of the effect of food on glucose levels, the Freestyle Libre seems just fine.