Waking up on Day 4

Upon waking up, I’m not especially hungry (I never am in the mornings) but I ate the prescribed L-Bar anyway. I’m hoping that by spreading the calories and carbohydrates throughout the day I’ll avoid the big surge in glucose from last night’s meal.

My weight is down about 3 pounds since I started the fast. I’m a relatively skinny guy anyway, so hopefully the lost weight comes from some of the middle-age pudge that has begun to appear on my belly, though it’s such a small amount that it’s hardly noticeable.

Bowel movements have been surprisingly regular and, um, abundant, despite the minimal food consumption. Hard to believe, but 80 hours after my last full meal, I can only explain this by assuming that I’m still working off last week’s food.

I’m supposed to notice some extra mental clarity, a common symptom of a brain running on ketones, though I can’t say I feel all that different. Subjectively I’d still say I’m under some brain fog, or maybe I’m just distracted by that annoying back pain.

The pain in my lower back became worse overnight and by morning I was feeling enough discomfort that began to wonder if something might be wrong. I feel it all the time, even when resting, enough to stall my falling asleep last night.

It wasn’t a pain per se, as much as a feeling that my muscles are being stretched beyond their limits, similar to the discomfort I feel when doing aggressive stretching exercises. It was painful to reach down and touch my toes. It wasn’t sharp enough that I’d bother noting it if I weren’t in the middle of a self-experimental fast, but I was beginning to think about mititations. I bet aspirin would make it go away, but I’m not taking anything except what’s strictly part of the fast.

It became annoying enough that I even left a message with my doctor (who understands my weird self-experiments and can appreciate that I’m able to make my own decisions about pain tolerance). I tweeted my pain too, wondering whether this was a John Sarno type psychosomatic epsisode.

And then suddenly the pain disappeared. Within 20 minutes of the tweet I was feeling just like normal. Not hungry, not tired. Just fine.

Probably the biggest problem with a fast is that food is such a social experience, tied up with so many of the important ways we interact with people. Today I had a business lunch meeting where it would have been awkward to simply sit there and watch the other guy. But he knows I have a reputation for these kinds of self-experiments, and I found it was easy to get him to indulge me with my Prolon tomato soup. I asked the restaurant to just serve me a big bowl of hot water, into which I stirred the soup mix, and I ate right along with him. No problem.

I think this is an underappreciated advantage of the fasting mimicking diet – you can still eat with your friends.

Similarly, our family dinner is an important ritual that I don’t want to give up. Now that my hunger pains are past me, I find it entirely natural to sit with the rest of the family and even help with food preparation, serving myself just my soup mix while everyone else eats the normal meal.

Of course, the ideal situation is to have a roommate, spouse, or other friend who’s doing the same diet, and then you can both suffer/enjoy together. 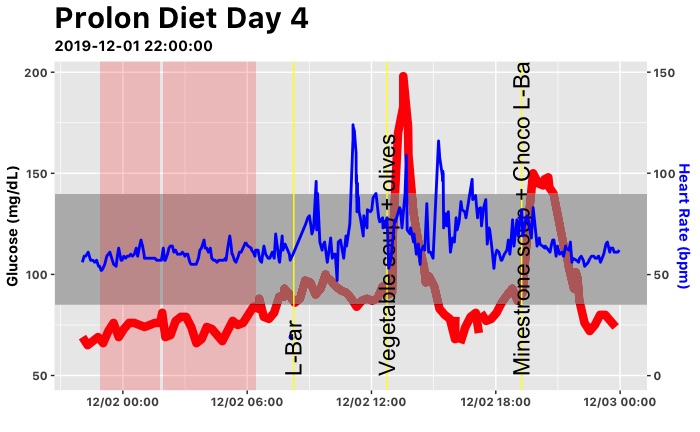