A summary of the best resources I know for thinking about nutrition.

John Ioannidis at Stanford does research on replicability in science, demonstrating the sloppiness of statistics that explains why so many studies fail to produce the same results when tried again.  He has given up on nutrition, saying that nobody should bother looking at most nutrition research because it’s almost impossible to sort statistically through the noise, and even if you could, the differences are so slight anwyay. My favorite chart is this one, from a systematic cookbook review he did about links between foods and cancer: 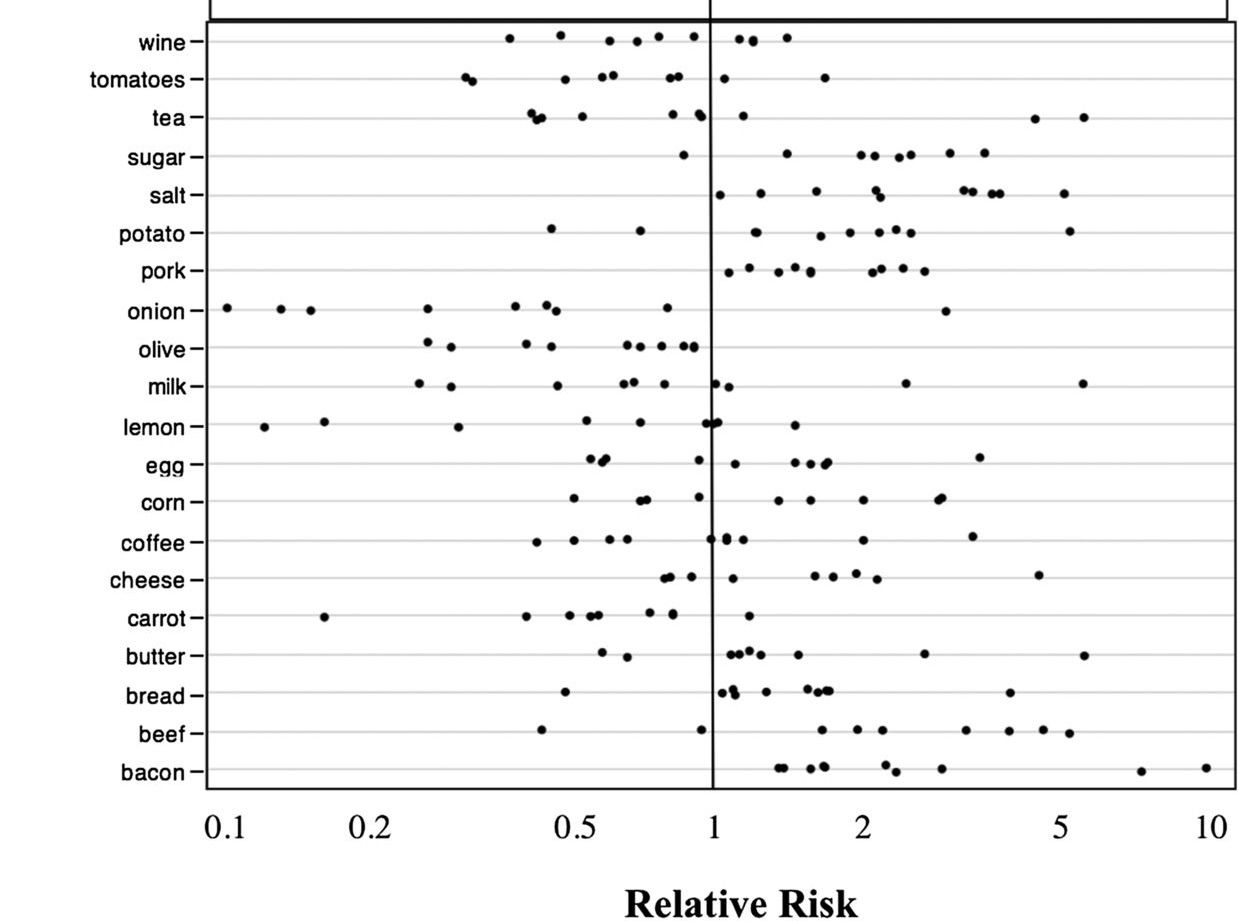 Jayson Lusk (twitter: https://twitter.com/JaysonLusk)  wrote Unnaturally Delicious, a book that summarizes many of the new technologies behind modern food production. For some reason, it’s often the “anti-“ side that gets more publicity (anti-GMO, anti-Monsanto, anti-meat, anti-cage, etc.) and it can be hard to find the counter-arguments, which are well-summarized in this book. He’s a food optimist, who agrees that there are always tradeoffs, but thinks generally the market and human ingenuity do a pretty good job of finding the right balance.

Aaron Carroll is a medical doctor who writes regularly for the New York Times about health policy, and one of his articles about Why Medical Advice Seems to Change So Frequently includes examples and references to specific cases that make his point. His recent book Bad Food Bible goes into more depth about this.

Alan Levinowitz’ book The Gluten Lie goes further, showing how a food fad starts and what makes it continue. Interestingly, he’s not a nutrition expert, but rather a scholar of ancient Chinese religion, who shows the similarities between religious belief and nutritional fads. Read a summary of the book in Skeptic magazine, or any of the items he often writes for Slate.

The site FiveThirtyEight did a similar takedown You Can’t Trust What You Read About Nutrition with tons of examples of odd associations you can find in diet studies if you look hard enough.  Food labels themselves are sometimes off by as much as 25% according to various studies summarized in BodyBuilder Magazine.

Product manufacturers, not the government, have the biggest incentive to produce nutritional labels that tout the latest research or fads. That was one of the takeaways from a long report by the USDA “Beyond Nutrition and Organic Labels — 30 Years of Experience with Intervening in Food Labels”.  The 90-page report summarizes the history of food labeling laws (see the nice appendix for a list), and gives some of the lessons learned from previous government initiatives around organic, country-of-origin labeling, and more. Written by government bureaucrats at the front lines, the chapter on how they approach GMO labeling issues is especially interesting because it shows the tension between setting standards and letting the market figure out the best way to offer labeling.

Speaking of labeling, some Canadian researchers produced a handy summary of the state of Fermented Foods in Food Guides Around the World. The authors want governments to include fermented food in their “food pyramids”, and this document makes their case while discussing how and why various foods are included in nutrition standards published by governments throughout the world. Only India explicitly recommends fermented foods.

The nutritional value of food depends on how it’s processed.  Learn more of the science in the article Nutritional comparison of fresh, frozen and canned fruits and vegetables.